Nothing like the last breaths of business for the end of the year. A few closures for this week's Shutter Report. See something papered or plywooded over? Drop us a line. 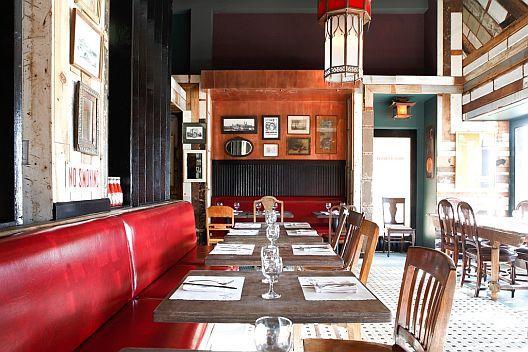 MID-CITY: Looks like third time is not a charm for Steven Arroyo. A reader sends the tip: "I just noticed that the Cobras and Matadors attached to Rita Flora at La Brea and 6th Street has closed. They’ve had paper in the windows for the last week or so and it’s been closed every night I’ve driven by." Please recall that Arroyo attempted Asian izakaya-style with Happi Songs in this location, changed it to Goat breifly (pictured), and then to another Cobras (also pictured because there was little renovation), which always worked well on Beverly and in Hollywood. Not so much on La Brea. Arroyo confirms that Cobras III is indeed closed, and says he will not be opening another concept in the space. [EaterWire]

STUDIO CITY: According to the LA Times, the Sportsmen's Lodge will temporarily shut down for remodeling after New Year's day. This contradicts what was reported earlier this year, but 'tis true. This means no more bar and bat mitzvahs, no more birthdays and anniversaries, no more weddings at the Caribou Restaurant, Muddy Moose Bar & Lounge or the handful of banquet rooms. A new owner plans to reopen the venue as a modern restaurant and boutique shopping center, perhaps with a new name, but no timeline or deets yet. [LAT]