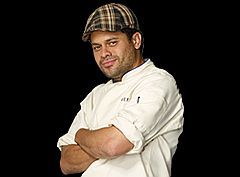 With three Los Angeles-area contestants on Top Chef: New York, chances are we'd see at least one pack their knives, and last night the first one said goodbye: Alex Eusebio. We chatted with the chef this morning to find out, among other things, why make creme brulee for live TV, what it means for a chef when someone spits out your food, and what he's up to now that Echo Park's Restaurant 15 is no more.

So?was Top Chef everything you thought it would be?
Yeah, it was stressful but still fun. You know, and educational. I'm just upset that I didn't get to represent to my full ability.

Is it difficult watching the episode you know you were cut from? Where have you been watching?
I was home with my wife. It wasn't that bad getting cut. During the show it came through that I wanted to go home, and I knew I was fine with it.

They started off with Richard's letter. You were pretty emotional.
It was a snowball effect and it kind of spiraled. I was a little upset about the Thanksgiving episode before, and then Richard going home [ed. Note: they were roommates on the show]. And we went right into the quickfire challenge, and it was Rocco, and I'm not a big Rocco fan. So I was like, eh, whatever. It was a little anti climactic. Then the elimination challenge which wasn't really my strong point, talking to the public and all that. At that point I messed up. You can tell my body language that I'm kind of out of it. That's one thing about watching the show: I didn’t' realize how many faces I make.

We haven't had much of a chance to see you on the show until this episode. Were you happy to be in the middle?
That was my plan in the beginning. Don't make a big fool out of yourself, that kind of thing. I don't really like being on the spotlight like that, I'd rather let my food do the talking. I was comfortable where I was. I do think that Thanksgiving day I should've done the turkey, but I let Ariane do it. I think if I would've done the turkey I would’ve had some momentum. I needed to get rolling, and once rolling it would've opened up the flood gates.

We get why you wanted to do dessert, but why crème brulee?
I honestly thought it was simple enough to do. I thought I could do it in an hour.

Is yours good?
Yeah, normally I make a good crème brulee

Do you think it was fair they let you go?
Yeah, it was fair. At the end of the day, I had just one more strike on me than anyone else. I ran out of time. The only thing is that my food was edible. It was a bad judgment call on my part, but at least it tasted good. Melissa had a problem with her food. Jamie's food could've made people sick because it was a raw duck egg. It could've?it didn't, but it could've in theory. Melissa's food was spit out.

There has been a lot of spitting out of the food this season.
I'm happy being eliminated as long as my food wasn't spit out. I mean, how do you respond to that?

Who was your favorite guest judge?
Jean-Georges because he was the real chef. That's one thing about the show so far, the guests aren't all really chefs. They are restaurateurs or celebrities or the rock band. Even Rocco is more a personality now than chef.

It's only been a few episodes but which challenge was your favorite?
The hot dog quickfire challenge was pretty fun and interesting. I made a Mexican hot dog, but it didn't hit the air really. Cooking at Craft was fun.

What have you been doing since Restaurant 15 closed?
Catering through the holidays so I can pay my bills. Still looking for my own restaurant, but the economy isn't the best. I got really close to finding a location on Melrose actually. If someone cool calls me, I'll be OK with that.

Knowing the contestants the way you do, who should we put money on to win?
I think Jamie is the most talented. You can tell that people practiced before the show. Those are the people who will go far because they studied the show. That's Stefan and Jamie. I myself unfortunately didn't.
· All Alex Eusebio Coverage [~ELA~]
· All Top Chef: New York Coverage [~ELA~]