They eat, we love to see them eat while diddlying their iPhones. Spot a celeb pushing greens around their plate? Send the sightings to the Eater StarWatch Inbox. 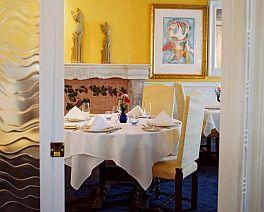 La Cachette: Donning flowing dresses or not, Angelina Jolie, her hunkster Brad and a few others were spotted having lunch in the private room last Friday. [StarWatch Inbox]

La Poubelle: Jan 31--"Had dinner, at the table next to us, outside, was Ricky Gervais (Extras, The Office) at a table of six. They were playing with an iPhone taking each other's pictures, Ricky putting candles up against his face for lighting. As usual, the service was terrible." [StarWatch Inbox]

Village Idiot: Fri night 1/28--"Since the weather felt so much like London, had dinner and drinks at the Idiot. First random celeb sighting: Yeardley Smith, voice of Lisa Simpson sitting at a four top. Don't know how I recognized her. Then a group of good-looking 20somethings sat at the booth near us. In the middle of the mix, Dave Lieberman of the food network, looking completely adorable." [StarWatch Inbox]

Jones Hollywood: Same night—"We moved on to and saw Aidan of SATC--John Corbett---looking much better these days. Short hair and thinner. He kept trading up as the night when on in terms of the ladies he was hitting on." (ed. note: He'll always be Chris in the Morning to us.) [StarWatch Inbox]

Tiki Ti: "Last Friday (1/25) grabbed a few Ray's Mistakes and none other than Kirsten Dunst was sitting at the bar with a few friends. She looked great and I could barely see her giant pointy snaggleteeth. She must have had them filed down." [StarWatch Inbox]

Katsuya Hollywood: Another meal infiltrated by Katherine Heigl and the paparazzi. Only here, she coyly tells the cameras that she's quitting smoking?as she drags on her cig. Classy. [Planet Gossip]

Koo Koo Roo: See, not everyone hates the chains on Larchmont. Wentworth Miller was spotted making nice with a fan and her camera. [Planet Gossip]

American Rag: Saturday lunch at the boutique cafe, Ron Livingston had a leisurely lunch with his girlfriend, and James Marsden sat at a table outside playing with his iPhone, brunching with a girl, and talking about awards season. [Defamer]

Murano: The WeHo high-design Italian spot isn't the first place that comes to mind, but "former-Chasidic-but-still-Orthodox-quasi-reggae singer" Matisyahu was in with a gaggle of guys. [Defamer]

Bigg Chill: Desperate for some frozen yogurt, Marcia Cross (sans makeup!) was spotted with her hubby over the rainy weekend. [Defamer]