Yes, that probably is the celebrity you think it is sitting at that table, so take mental notes and get back to us. The StarWatch tipline awaits. 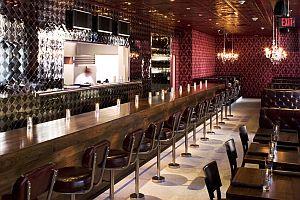 25 DEGREES: Saturday (2/9): "A suit comes in to check if two booths being set up are to his liking. Fifteen minutes later here come more teenagers than I've ever seen on Hollywood Blvd except when Hannah Montana movie at the El Capitan gets out. With them is Robert Downey Jr! I guess when you can't party anymore you might as well play chaperone for kids night out. Ate a burger looked good but kinda old but maybe that was just because of all the young blood. After they left Howie Mandel got the next booth but he had neither an army of kids nor suitcases filled with millions of dollars." [StarWatch Inbox]

THE HALL AT PALIHOUSE: So new, yet already attracting the stars. "Went last night (2/11) for a very nice dinner. The courtyard is very serene, the music was good. Service was very attentive as their staffed for a full house and it was 1/4 full. Mandy Moore was there." [StarWatch Inbox]

BASTIDE: "On Saturday eve (2/9), a slightly pixilated-looking Darryl Hannah and friend were the last people around 1:30am." [StarWatch Inbox]

LA DOLCE VITA: "Last night, (Monday) we sat next to Tom Ford, chest hair and all, who was nibbling the Caesar salad in the 'George Raft' booth at fossilized restaurant in Beverly Hills." [StarWatch Inbox]

KATSUYA HOLLYWOOD: Musician John Mayer "shot the shit" with some TMZers he ran into last night. It will take more than a few sake bombs for their allegiance, John. [TMZ]

THE BLVD: On the other side of the Beverly Wilshire hotel and a day a part, Susan Sarandon was at an outdoor table being very gracious. The tipster said: "I'm gayer than a pink hairnet, and this woman was beautiful as hell." [Defamer]

KETCHUP: A bearded David Spade and tiny Verne Troyer were chilling together on 2/7 "laughing and drinking and skeezing out on the Playmate-types circling them." [Defamer]

HUGO'S: West Hollywood, Sunday February 10: The ever stunning Dita Von Teese, James Cromwell, the ever delightful Jeremy Sisto, and the underrated Lake Bell, not together although Sisto to stop to chat with Bell and Cromwell. [Defamer]

After 18 Long Months, Father’s Office Returns to the Arts District