We got a sneak peek at SBE's new Foxtail last night before they threw a big investor's party. Of the design, the press release says: "Art Deco and Art Nouveau influences with the edgy chic of 1970s London and such 'rock and roll' fashion emporiums as the legendary Biba." Downstairs, the dining room and bar, low ceilings, lots of mirrors, cool light fixtures, swanky silverish leather chairs, servers in designer striped-dress uniforms. Upstairs, the nightclub, lined with banquettes and custom-made tables with ice buckets built in for bottle service, and a separate entrance around back. When we asked partner Brent Bolthouse how one gets into the Foxtail nightclub, he didn't really have a definitive answer. Dining downstairs definitely doesn't grant entrance; words like "exclusive" and "reserve a table" were used. The press release throws around investor names like director Brett Ratner, NBC Entertainment co-chairman Ben Silverman, producer Scott Stuber, and Endeavor's Patrick Whitesell, so expect to never get in unless you're connected or hot. 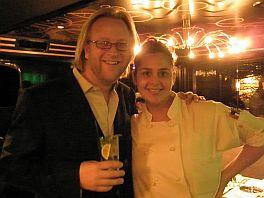 As we learned, Foxtail's chef Antonia Lofaso is the only Los Angeles cheftestant for the upcoming season of Top Chef. She was very gracious about the experience, but wouldn't crack when we peppered her with questions. She gave us nothing. No signs, no tells. Nothing. Kevin Stuessi (also pictured) is the new president of SBE's restaurant and nightlife group; he just came from Vegas after working with Steve Wynn for many years. Antonia says she's excited to see TC4, but Foxtail is her main focus right now. The menu will be her version of European bistro cuisine, things like seared big-eye tuna nicoise, and steak frites with fried egg and black truffle. SBE bigwigs say they hope to open Foxtail on Wednesday, February 27.
· Top Chef Chicago: Contestants, Premiere Announced [ELA]
· Foxtail, Rendered [ELA]