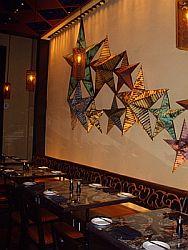 Hammers and saws are still pounding, and the official permits have red tape stuck all over them, but barring a busted pipe or a too-picky last minute inspection, Emeril Lagasse's Table 10 is slated to debut today at the Palazzo. The Bam Man was even spotted in the kitchen this week, exhorting his troops and putting the finishing touches on a menu that will capture "....the warmth and camaraderie of the restaurant kitchen...." that Emeril remembers from his early days. The name: Table 10 is where he planned nightly menus and hired staff at his first restaurant in New Orleans. Just how a 225-seat $7.5 million behemoth can capture such intimacy is anyone's guess, but it has a top shelf position at the top of the escalator at the uber-plush Palazzo shops. No doubt the future will feature large doses of Absence Of Emeril, but for now, he's manning the stoves and expediting like a young and hungry sous chef.