The Dip Becomes The Infield

Share All sharing options for: The Dip Becomes The Infield

Several people emailed to ask what's going on with The Dip in Sherman Oaks, noticing that it was closed and being renovated. Although we attempted calls for details, reader Joseph upped the ante on audience participation and supplied this report on what will soon become The Infield:

"Ken Davitian and crew have always had a hot dog concept in mind and thought no better time than now to fill the void left by establishments like The Weiner Factory. Ken's son Robert Davitian will be taking the reigns of the new concept at 14333 Ventura Blvd. The first question I asked, of course was, are the dogs steamed or grilled. Steamed was the answer. Seems this family grew up on Pink's and some place called Chronis's on Whittier Blvd that I had not heard of. Then I asked who was going to make their hot dogs. They will be using a variety, there were quite a few Robert named but here is what I remember, Papa Cantellas all beef hot dog - the same dog The Stand uses, a Sabrett dog like the Weiner Factory used, a Hebrew National and even a Wagu Beef dog from New Zealand." 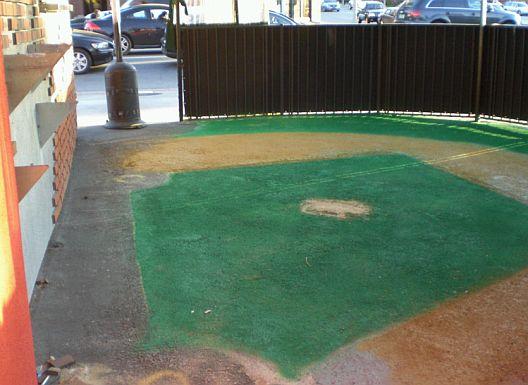 "I told Robert that the construction piqued my interest. He said studio designer Ben Gruenberg was in charge taking the Davitian's vision and creating the look and feel. Its not completely finished but when its all said done it will have a baseball stadium theme complete with authentic stadium seating, even a ticket window. It will be called The Infield."

Of course, Ken Davitan played Borat's producer Azamat Bagatov in the movie Borat. From his son, Robert Davitian: "I am out to provide a superb hot dog, great ambience and an affordable meal for the entire family. Oh oh oh and we are keeping the Pastrami sandwich! Cuz we gotta have a Pastrami Dog"! He says he hopes to open on March 31, Dodgers opening day. Davitian's also accepting any suggestions or tips because "a hot dog is such a personal thing, I know I can't please everyone but there's no reason why I shouldn't try." Email theinfield@gmail.com to have your say.