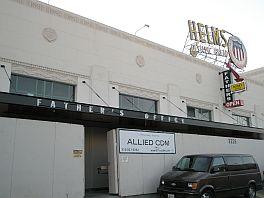 Timing is everything in life, folks. We found ourselves in Culver City this weekend at exactly the moment the door to Sang Yoon's highly anticipated Father's Office II was open. And there's nothing we like more than an open door. To our surprise, Yoon was on premises and granted a tour. The gist: A 50-something-long bar (take that, Rush Street), 72 taps for 36 beers, a fancy new wine tap system, big booths, fixed tables and banquettes, custom-made picnic tables for the patio. The success of Father's Office is more than the burger, it's also Yoon's uncompromising confidence in it all. At FO II, it's all about the details: The walnut bar, recycled bottle bricks in the bathroom, the way the kitchen was built and with what materials, the cocktails---only four house specialties with an occasional seasonal one thrown in for good measure---the spirits, no vodka, the mixers. The menu is the same as the original, but with more space and new toys in the kitchen expect some experimentation. Still no hard date for an opening, but know it's only weeks out. Weeks, people. Start planning your table strategy now.
· Father's Office II Has Signage [~ELA~]
· Fall Tracking Report: Father's Office II [~ELA~]