For fans of Downtown 'cue, a sad, sad day indeed: The original Original Texas Barbecue King, affectionately known as BBQ King, has gone to the great kettle smoker in the sky. Since 1994, the corner of Figueroa and Caesar Chavez was anchored by the flat white building with flags and "BBQ King Loves America" painted on the side, surrounded by billowing smoke. But for the last couple of years, a sign for the Orsini III, another Tuscan-themed rental property like the one across the street, spoke of impending doom. Here's how it was supposed to shake down: When construction started on the new apartments, the King would move to a storefront in the other Orsini property. It didn't sound amicable, and there's rumor of a lawsuit and the developer pulling out of the deal. And today, rubble. According to one of the BBQ King owners, "there were problems." With the developers, we asked? "No doubt."

On a positive note, The Original Texas Barbecue King has a new location at 53rd and Vermont and plans to open this Saturday. 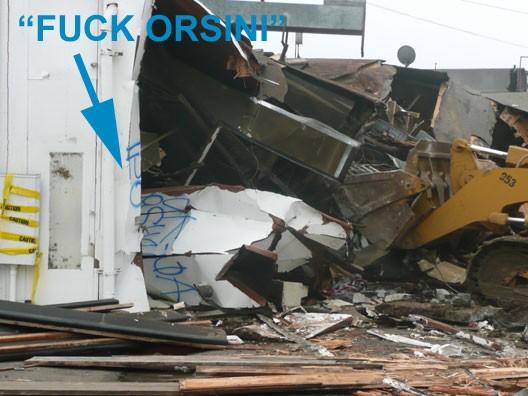 The "Fuck Orsini" scrawl on the side of the BBQ King on Caesar Chavez was readable till about 8:30am--at that point, the former BBQ joint was just a pile of wood. More photos of destruction at Curbed LA.
· DestructionWatch: Orsini III Has Its Detractors [Curbed LA]
· Downtown's Orsini Smoked Out By Texans [Curbed LA]