Having spent many a year slaving away in and later observing the restaurant industry, we know that's there's no drama like restaurant drama. No, The Restaurant wasn't a huge hit, but it was sort of a precursor to all the others. Top Chef is now officially a run-away success; Gordon Ramsay's Hell's Kitchen and Kitchen Nightmares, both the U.S. and British versions, are adored. The Food Network and PBS have their own take. But just like every reality show concept, people are clamoring to come up with new versions of the same theme. The bandwagon isn't nearly full yet, but almost. 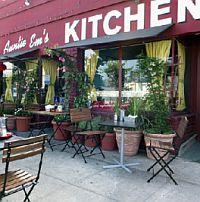 Knife Swap: If the name doesn't give it away, it's like Wife Swap, but with chefs. We were tipped off today about the local connection: "A friend went to Auntie Em's the other day and had to sign a release because they were shooting some kind of trading spaces show where restaurants swap chefs? And Auntie Em's chef was replaced with the chef at Ritual?" Confirmed, mostly. Auntie Em's owner Teri Wahl is one of the chefs in the pilot. The other might be Ritual's Andrew Pastore, but we're still awaiting confirmation. Each chef takes over the other's kitchen and restaurant, the staff, etc. and hopefully entertainment will ensue. The show will air on TLC.

The Chopping Block had an open casting call a few weeks ago, so it will be interesting to see if any Angelenos make the cut. According to Variety, that walking drama that is chef Marco Pierre White will oversee eight couples who take over two side-by-side New York restaurants and compete win their own place. In a sort of Hell's Kitchen (same producers) and Apprentice mashup, there will be challenges, judges, and we're sure some classic insults from White. Of the host, a network head says: "He's the original rock-and-roll chef....he made Gordon Ramsay cry, so he's going to make some of our people cry, too, I'm sure." He's also too big for basic cable: The Chopping Block will air on NBC.
· NBC puts White on 'Chopping Block' [Variety]
· Casting Call [~ELA~]