You don't need get on a reality show to be our friend. See a star at your favorite watering hole or restaurant this week? Put "StarWatch" in the subject line and drop it in the tip jar. 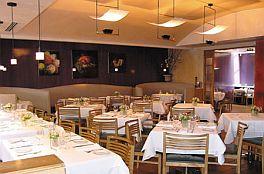 VINCENTI RISTORANTE: A reader was at the Brentwood spot earlier this week. "Saw heavenly John Cusack dining a deux with a lucky girl, and at another table Jamie Lee Curtis and Christopher Guest with another couple." [StarWatch Inbox]

BLT STEAK: We hear Jeffrey Katzenberg and Raquel Welch were just two of the famous faces in this first week of business. Not as famous: we spotted restaurateur Adolfo Suaya (3/21) with two gals and one guy, all looking much, much younger than him. [StarWatch]

MADRE'S: The fact that J-Lo's restaurant is still open in the Dena is shocking enough, but Stephen Hawking chatting with admirers(3/15) and hitting the "THANKS" button on his wheelchair-mounted computer takes blows the mind. [Defamer]

DUSTY'S: (3/16) Fromer Grey's star Kate Walsh spotted at the Silver Lake spot with a friend for brunch: "I was stunned that she looked normal, yes still skinny, but not so skinny I wanted to force feed her lard." Later that day, Eva Mendes in for the lunch rush. [Defamer]

OSTERIA MOZZA: (3/19) Giovani Ribisi, "who appears to be shrinking every time I see him (or maybe I'm eating too much Mozza pasta)", and Andy Samberg at a table of four. [Defamer]

CANTER'S: Another SNL-ish sighting: Chris Parnell noshing with the rest of the lowlifes at Canter's on a Tuesday night (3/11). "Chatting with a female friend, looked platonic". [Defamer]