HERMOSA BEACH: A tipster sent some cellphone snaps of progress at Brix@1601 in the Hermosa Pavilion, just north of Hermosa Pier. "Looks huge with many private rooms. Also a retail wine space next door." Supposed to open late April. In previous Plywood, we learned it also have a private wine cellar, rooftop lounge, "lots of chandeliers, leather booths and bricks all over" but no one mentioned the tree columns.[PLYWOOD] 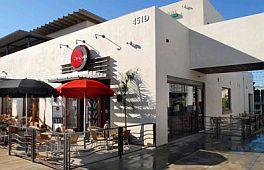 MANHATTAN BEACH: We reported earlier this year that DeliBoys in the Metlox Center was closing, even if it was still open when we called to confirm. But it's officially dunzo. Brad Metzger tells us Sashi, a "high-end, Koi-type" Japanese restaurant, will be moving in, with Makoto Okuwa as executive chef. Okuwa worked with Masarahu Morimoto for several years and even appeared on Iron Chef with the Iron Chef. Owners are Jeff Benson and Greg Harris, a couple of South Bay real estate guys; KAA Design Group is in charge of design. They're shooting for a late summer/early fall debut. [PRE-PLYWOOD]