For those who bitch and moan that we give too much Top Chef away: ****Warning: Possible Spoiler Alert**** 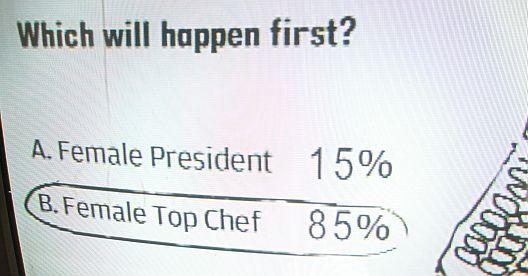 This week's on-air poll wasn't nearly as entertaining as last week's, but it merits a mention. The taco/block party episode started with the women talking about how nice it would be for a woman to win, lamenting the loss of yet another female chef from the day before, which of course set up the scenario a dude would go this week (he did). But this poll harkened back to something an Eater commenter said before the season premiere:

"I have spoken to several people on the show this year and it is clear that a women is going to win this season. There are three in the final four and one male (Richard). Antonia i believe made it to the final four along with two other ladies."

Of course, there is no way to know that this person knows someone who knows, but we likey this idea of Antonia in the final four. Game on, bitches!
· Top Chef Speculation: Early Tells? [~ELA~]
· Top Chef Poll: To the Bears [~ELA~]
· Top Chef Local Debriefing: The Ego Taco [~ELA~]