From a local (i.e. Antonia Lofaso) perspective, the Top Chef taco episode was kind of a snoozer. The majority of the 14 remaining chefs are still sitting comfortably in the middle, Antonia included. A Quickfire summary: Rick Bayless was the guest judge sporting a nice purple shirt and a surprisingly Shaggy-like voice. The cheftestants make fancy "fine dining" tacos, and the cockiest egos really stood out. Spike refused to make fancy tacos, opting to take the street food route instead, but was picked as a top taco for "soul satifying flavor." Manuel thought his proper pronunciation of tomatillos and chorizo would merit an automatic win. Twitchy Andrew thinks he'll win Top Chef because of "his crazy ideas always popping in his head." Bayless couldn't even chew through Lisa's grilled steak taco. Big bald Erik's plate looked like a plate of slop. And once again, we never heard or saw what Antonia made. When Richard's jicama-wrapped tacos won him immunity, Spike was beside himself. His attitude set the tone for the rest of the episode; must've been that yellow hat. All the gang's here: Ted Allen's first appearance this season, Bayless, Pads, TC. And away we go!

Antonia wasn't very prominent in the elimination challenge either (a good sign she'll make it into the top 10, maybe even the top five), but here are some general favorite moments/highlights.

1) Chefs split into two teams. Antonia's on the Blue Team with QF winner Richard, Stephanie (again), Lisa, Aussie Mark, Niki, Manuel. Spike thinks they're all already losers because Richard has immunity. In the cars (RAV 4s!) the producers must've asked the chefs to call their teammates in the other cars to talk "strategy." Antonia knows it's a futile effort; there's nothing to talk about until they know where they're going; Red blathers on about nothing all for the sake of 'good TV'.

2) They land in a random Chicago neighborhood to cook for a block party, and shopping entails scrambling door-to-door to find groceries from the locals. This makes Richard the Introvert uncomfortable. Twitchy Andrew says they're running around like New York City rats, and then it struck us:

3) Spike lies to Antonia about what's left in one house. He and Andrew have the same inflection when they say things like "score!", "sabotage," and "success." They point out that they both have red beards. They now both completely annoy us.

5) Someone should tell Padma she can take small bites of things. Her attempts at shoving a s'more on a stick in her mouth resulted in s'more on Ted's shoe.

6) Judges table: Blue Team gets called in first. While Red Team waits, Andrew consoles the team: "That was in no way a loss in any way shape or form. Period." Judges seem to have nothing good to say about Blue. Mac and cheese "formed a brick." Tom becomes a little obsessive about Richard's paella. But, sans smile, Padma informs the Blue Team that they won "by a small margin." They love Antonia's bean salad, but names Stephanie winner again. Her dessert was "genius." Red Team, or Team Ego, at judges table; no one knows why they lost. Team gets accused of dumbing down for the neighborhood. Spike excitedly explains that they were cooking for the 'hood, not the judges' palates. They "made the block party." Andrew annoys Tom with this sentiment: "You'll have to drag me out with security gaurds, cause I ain't goin nowhere. This is my house." Zoi gets three bleeps in one sentence because she was sure her pasta salad would kill it for her, but in the end, corn dog king Erik goes home.

For the record: Sure he was dead-center, but we're sticking to our theory. 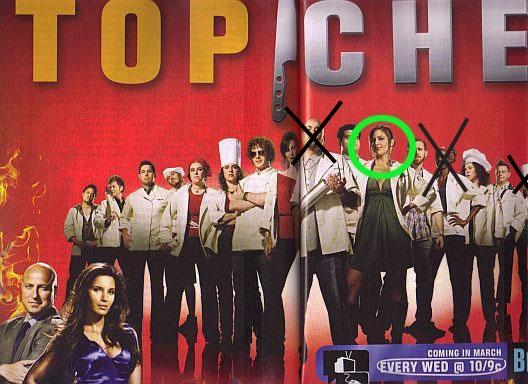