Top Chef: The Excitement, It's Palpable

Share All sharing options for: Top Chef: The Excitement, It's Palpable

Can you feel it in the air? Yeah, that's the electricity, the spark that happens right before a new season of Top Chef is about to begin. Bloggers start chattering, everyone's looking for a spoiler, pitting local chef against local chef, trying to suss out the villains and heroes. As usual, you'll find weekly Top Chef coverage here, but until then, here's a little preview chatter before Wednesday's premiere. 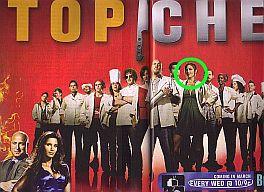 COLICCHIO CHRONICLES: We'll overlook Padma's love of Tom's eggs, and Tom salivating over a Padma/Gail sandwich, because the Big C tries to discredit our previous spoiler sleuthing: "I’m on a website and there’s three pictures. And it starts off by saying they figured out who won because it seems that the person who won was always front and center. Okay? And so they’re looking at the ad from Season Four and saying well so and so is going to win because they’re front and center. Ridiculous. We shoot that the first week of production. We have no idea who is going to win. It’s just coincidence." [Monsters and Critics]

COMPETING COUPLE: The Amuse-Biatch, even more conspiratorial than we, gaydar is all a-twitter over two female cheftestants from San Francisco. [Amuse-Biatch]

CHICAGO, THE STAR: Take a closer look at some of the places Top Chef took over while in the Windy City. Warning: There's a bit o' spoilage going on here. Yes, already. [Gridskipper]

HUNG UP: There's no better time for last season's winner to get some face time than right before the next season begins and he becomes nothing but a passing one-liner. Hung Hyunh takes on rabbis at Solo in New York, and deciphering the man through his meals. [TONY/Grub Street]