Lots of sightings at Nobu this week, but you know these celebrities: They're everywhere. Spot one? Right here in the StarWatch Tip Jar, please. 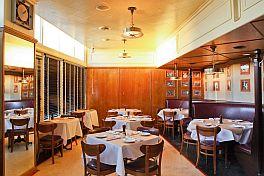 Little Dom's: Let's head to Los Feliz: "Some friends and I gave Little Dom's a try last night and I have to say, I quite liked it. It has such a good vibe. Sitting in one of the booths in the back corner, was Christina Ricci, along with some random guy. She had the pappardelle with sausage, ricotta and peas. Good choice, I thought, although my boyfriend had the same dish and his peas were undercooked. At least they were fresh, though." [StarWatch Inbox]

Fred Segal Mauro Cafe: A faithful tipster writes: "Giada DeLaurentis (whom I believe is pregnant) was there with her hubby on March 1. She had lentil soup and a salad; he had gnocchi." [StarWatch Inbox]