Nobu's grand opening on Wednesday night: We went, we saw, we ate. Most people didn't even look at the menu, they know exactly what they want and in what order. Pacing wasn't as rushed even after being told we had a two-hour table limit when making the reservation. A few time lapses, but that's to be expected on opening night of any restaurant. The army of servers, six sushi chefs, several hostesses and multiple managers are definitely gearing up for the blitz. 8:30pm: some empty tables, mostly empty patio and center room (with the L'Orangerie skylights). 9pm: Almost full. The sushi bar room is the see-and-be-seen scene for now. With little obstruction, tables are just close enough to feel the glow of celebrity (or to eavesdrop), but not so close that you feel like sardines. GM Justin Wyburn thinks the patio will soon be the most requested; it's completely enclosed and no chance that pesky paparazzi swarm outside can intrude. 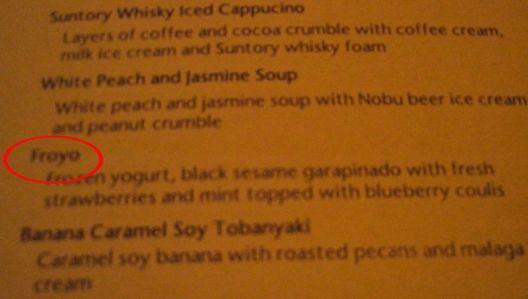 One bite of miso black cod, yellowtail with jalapeno, or the warm mushroom salad leaves no doubt that Nobu Matsuhisa was the progenitor of it all: Balanced, perfect. Tempura uni or mini lobster tacos, not so much. The sushi is high-quality, but you can find just as good and lower prices all over LA. But that's not the point of Nobu, now is it. Desserts (above): Frozen yogurt was a nice, palate-cleansing end, but calling it "froyo?" Did Nobu just jump the shark? (903 N. La Cienega Blvd, WeHo, 310.657.5711)
· Nobu Starwatch [~ELA~]
· Nobu LA Revealed [~ELA~]