We couldn't run StarWatch on Friday due to some technical difficulties, so here's a special Monday edition with---bonus---pictures! We don't require visual proof of your StarWatches, but a few readers took it upon themselves to catch the celebs in action. We'll take any and all celeb sightings, snaps, whatever, in the tip jar, please. Use "StarWatch" in the subject line to ensure it doesn't get lost in the shuffle. 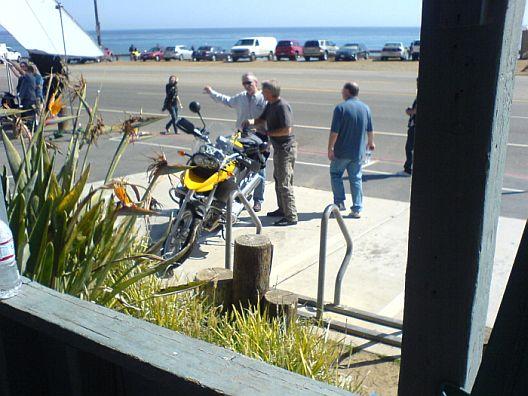 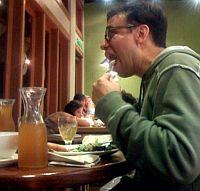 M CAFE DE CHAYA: SNL's Fred Armisen was snapped eating a salad last week: "He sat down next to us and I just couldn't resist. Fred was so engrossed in his salad he didn't notice--nor did he notice my sis who is a professional dancer, and was in such a full glittery costume, post performing, that it could be seen from the moon, by blind people. Some salad!" [StarWatch Inbox]

NEPTUNE'S NET: A tipster spotted Harrison Ford (and motorcycle, above) with Mary Hart in Malibu doing an interview for Entertainment Tonight. "He ate a chicken sandwich and Mary Hart had the salmon salad. Food of the Famous." [StarWatch Inbox]

ANGELINI OSTERIA: From Friday, 4/18: "I just ate at Angelini Osteria and at 7pm Brian Grazer and Sumner Redstone were eating at the table next to me! Brian was with some very made up Asian woman. Spiky hair in effect and Volcom backpack. Sumner is old, and I won't say anything bad about him because he's so old. And that's sad. But he did have a navy blue Lincoln Towncar waiting out front with some contraption on top called Tracvision which I imagine allows him to watch anything from anywhere in the world." [StarWatch Inbox]

JOAN'S ON THIRD: This was probably all over the tabloids, but still good: "Not that it is anything new, but I happened upon Lindsay Lohan and Samantha Ronson today (4/15) over lunch at Joan’s on Third. Lindsay looked (dare I say) radiant! They were perched out in front at the main entry causing a delightful stir as always." The two were also spotted at Mister Parker's at the Parker Hotel, Palm Springs. [StarWatch Inbox; Planet Gossip]

BARNEY'S BEANERY: Who knew the Pasadena location was a draw: Matthew Perry on trivia night on 4/10. [Defamer]