Lemonade BevHills a few weeks ago, Blackburn and Sweetzer 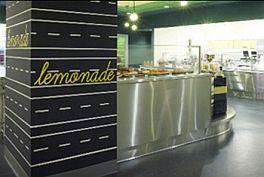 More grab-and-go options for worker bees downtown: Lemonade, a cafeteria-style lunch spot from the people behind Jackson Someset Catering, opened a few weeks ago at City National Plaza. Chef and co-owner Alan Jackson talks up the menu as veggie-centric, healthful, with world flavors. You've got sandwiches, soups (chicken with kafifr lime and lemongrass; ancho chile braised pot roast), and side salads (snap pea and edamame, chicken with jicama, roasted beet) to mix and match. And, yes, lemonade. The Downtown location is only open during the week, but Jackson tells us their opening a second location in the former Tea Garden space on Beverly Boulevard in two weeks. Yes, this is the place several of you have emailed about. The space and concept will be just about the same---mostly to go, some table seating---but the menu will be more high-end. The Bev Hills location will stay open until 8pm, six days a week.
· Lemonade at Beverly and Almont [Blackburn and Sweetzer]
· Old Yellow: The Lemonade Stand of the Future [UD]