Adventures in Shilling: The Yard House vs. FO II

Share All sharing options for: Adventures in Shilling: The Yard House vs. FO II

Time to revisit Adventures in Shilling, in which we fight shilling the best way we can, by shaming tasteless, unscrupulous shills into submission. Well, that's the plan, at least. Fight shills yourself by dropping offensive links here. 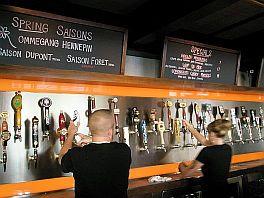 To some beer aficianados, comparing Father's Office I or II to the Yard House is like comparing apples to elephants---loud, raucous chain vs. intimate, independently owned bar; notable burger vs. chain food; classic rock vs. anything but classic rock; every beer under the sun on tap vs. well-rounded selection; beepers for tables vs. scrambling for tables. But here a Hound of few words, unless those words start with a Y and H, thinks the FO hype is for losers:

Went there [Father's Office] for the first time ever based on the postings here, the $11 Blue Cheese and only burger on the menu was ehh, the beer selection was no better than going to the Yard House, & more expensive for their IPA's. It's a busy place but.....for the price I just don't get it. Went with a friend, 2 IPA's (India Pale Ale, Stronger type beer served in goblets), 2 burgers, basket of sweet potato tasteless fries, and what I thought was actually very good were the tapas of olives w/ almonds in their special marinade...$55 bucks.

It's that marketing jargon like "Beer Lovers' Paradise" that disappoint us. Shill Probability: 99.8%.
· Father's Office: What's the Big Deal? [Chowhound]