Inflation, unemployment, a shattered housing market: People aren't going out to eat as much, and when they do, they're not tipping like they used to says the LAT. Luckily in California, the 1.1 million food service workers get minimum wage plus tips, but they're still feeling the crunch. So maybe that's why Crazy Fish started a new tipping policy? It's pissed off one regular customer (and Eater reader): 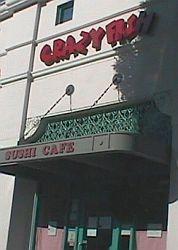 "I've been going to Crazy Fish Sushi on Doheny and Olympic for two years. Reasonably priced sushi...good portion size. We went the other night on Friday...and received the worst service....ever....we had to ask for everything. Granted...the server looked new....we hadn't seen him before in our monthly if not every three week visits. We were shocked that on the bill....which we asked three people for...that they add a 15% tip for themselves. I wouldn't have cared, except for the fact that this particular server (the busboys were great) did not deserve this. My bf brought the bill to the manager, pointed out the waiter and inquired about the surcharge. Her reply- yes...we've been doing that for a month now...sorry. Now...we always tip 15-20%, but to add it on for a party of two? Is this the norm now to just include it?"

News to us. Anyone else see odd tipping practices around town? In the comments, please. (Photo: Yelp)
· Tip-dependent workers feeling the slump [LAT]