Share All sharing options for: Cooking the Top Chef Cookbook 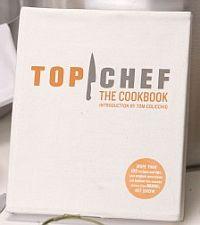 It's safe to say the only people who could really appreciate Top Chef, The Cookbook are rabid Top Chef fans, which Betty Hallock is not: "The charts (a handy elimination bracket that even a kindergartner would appreciate), the quotes ('I've got a false testicle, and I'm ready to cook') [ed. note: Ah, CJ, how we do miss thee], the trivia (the second-season winner's favorite piece of equipment is the short plancha spatula) and graphics ("Top Coif") are ridiculously hilarious (emphasis on the ridiculous). But can you actually cook from it? Would anyone want to?" One recipe she tried, the vending machine veggie loaf from season 2's Carlos Fernandez (judged by LA's own Suzanne Goin), "was wretched." True fans probably wouldn't get passed the Top Coif page (which is absolutely brill, btw) anyway. [LAT]