The Westfield Century City mall is the new Asian food testing ground for Los Angeles. Ok, that's a stretch, but two groups are using the mall as a launching pad for new pan-Asian and dim sum concepts this summer. First up: Take a Bao. The above snap was sent to us by a local agency worker dying for something more than Panda Express and California Crisp, begging us to find out more. Here's what we know: The tagline is "reinventing Asian cuisine," which is what founder Brent Stein and chef Christian Lomas (former exec chef of AZ in New York) hopes to do with their take on the traditional steam bun. Stein says these will be more like David Chang's creations at Momofuku in New York than what you see on dim sum carts in San Gabriel Valley: the dough will be thinner, filled with things like pomegranate skirt steak or crispy fish; they'll be folded over and kind of flat, "like an Asian sandwich." Take a Bao's menu will also offer sides, salads and noodle dishes to mix-and-match. The space is designed by architecture firm Johnston Marklee, who also did the Hungry Cat. Stein has some heavy hitters on his team, too: Bob Spivak, founder of the Grill on the Alley and Grill Concepts, and his restaurant consultant business partner, Chuck Frank are partners. They're aiming for a mid-June launch. 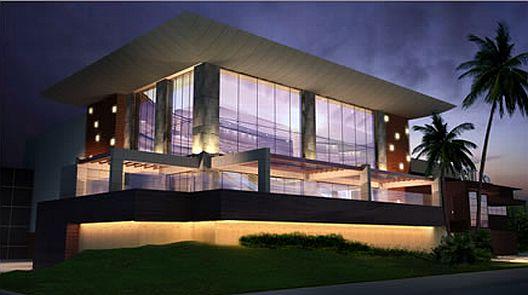 We've had reports that construcion on RockSugar, Cheesecake Factory founder David Overton's new pan-Asian concept, is thoroughly on its way, but this is all we have on how it will look: "Decor and design was inspired by a photograph of an obscure hotel in the Maldives and incorporates the resort feel of Southeast Asia." In grand Cheesecake Factory/Grand Lux Cafe fashion, that means soaring ceilings, handcarved timber beams, limestone flooring, gold-leaf-inlaid columns, and ornate Asian art. This is all to match Singaporean chef Mohan Ismail's family-style menu of Thai, Vietnamese, Malaysian, Singaporean, Indonesian and East Indian specialties. A message for the RockSugar career line says the restaurant will open in June.
· Rock Sugar to Open at Century City Mall [~ELA~]