The finale is in the can, the chefs are all back at their jobs, but we won't know the top cheftestant until June. Or will we? Some serious spoilage below. Read at your own risk. 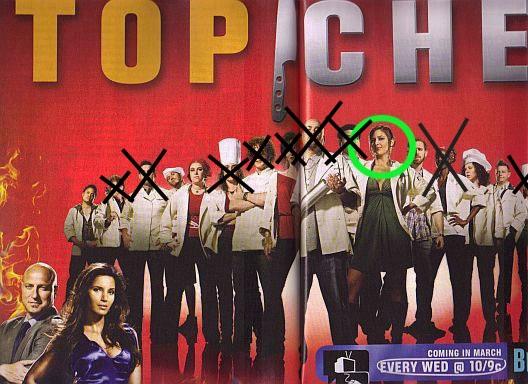 Now, you folks know we have a penchant for spoiler fun, especially when it comes to Top Chef. We just can't help it. Hints were dropped---we knew the finale was being filmed in Puerto Rico last weekend, for instance, and we guessed that LA's Antonia Lofaso, exec chef at SBE's Foxtail in West Hollywood, would get far in the competition based solely on ad placement alone. But we now have something juicier, more substantial, meaty, if you will. In tonight's ep, there are seven chefs left; by the time the finale airs on June 11, it will be down to three. Want to know where Antonia lands? You know the drill: After the jump.

Our queries as to Antonia's whereabouts over the weekend (for an out-of-town couple, fans of the show, who wanted to dine at Foxtail to meet her, honest!) went unanswered, so that was our first clue that she quite possibly made it to the finale in Puerto Rico. And if what we just heard is true, nothing direct but originating from a very good source, not only does Antonia make the final four, but she is in the final three. This completely coincides with something a tipster dropped in the Comments line when the season started: Three women in the finale, one wins. We might know if Antonia won, too, but we can't ruin everything for you, right?
· All Top Chef Coverage [~ELA~]