Well, apparently this town isn't big enough for two Wolfgangs. It's come to our attention that Wolfgang Puck filed a trademark infringement and unfair competition suit today in Los Angeles Superior Court against the owners and operators of Wolfgang's Steakhouse by Wolfgang Zwiener. Zwiener, as you know, opened his New York steakhouse on Canon Drive just a few short blocks from Spago and Wolfgang Puck's steakhouse, Cut. Hilarity ensued. But it's no laughing matter to Puck. From the press release:

“People have come to me and asked why I was opening another steakhouse in Beverly Hills and whether I am going to close CUT. I tell them the new steakhouse has nothing to do with me and they stare in disbelief. The most common reaction is ‘It says Wolfgang’s Steakhouse and you are Wolfgang.’ In over thirty two years, I have never encountered such confusion expressed by my patrons and in the media. My friends have repeatedly urged that I take the steps necessary to correct the ongoing misleading impression. All of this would have been avoided had Mr. Zwiener paid more than lip-service to our 2007 agreement and actually tried to avoid confusion.”

More about that 2007 agreement, next. 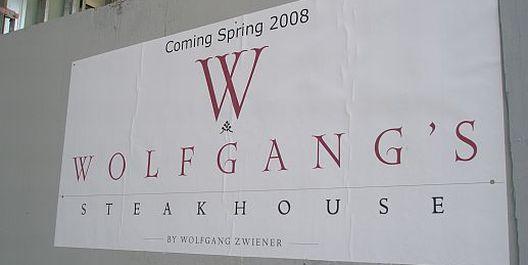 According to the lawsuit:

By prominently featuring the name “Wolfgang’s STEAKHOUSE,” and minimizing the tag-line “BY WOLFGANG ZWIENER” the lawsuit alleges that the owners and operators of “WOLFGANG’S STEAKHOUSE BY WOLFGANG ZWIENER” (one of whom is affiliated with a company whose license to use the Spago trademark in Japan ended in 2005 and Wolfgang Puck chose not to renew) are brazenly seeking to take unfair advantage of the reputation and enormous good will developed over the last 32 years by Wolfgang Puck and the Wolfgang Puck brand.

In addition, the suit alleges that Mr. Zwiener has violated a 2007 agreement whereby it was agreed that if Zwiener opened a restaurant outside of Manhattan he would use his full name “Wolfgang Zwiener” in a manner which would eliminate confusion regarding any affiliation between “WOLFGANG’S STEAKHOUSE” and Wolfgang Puck.

We've been to both Wolfgangs' steakhouses, and at the new Wolfgang's, the porterhouse for two is big enough to feed three, it's tasty, the 'schlag' on the shipped-in cheesecake is a nice touch. But call us an Angeleno: Cut takes it by a long-shot. Wonder what the owners of Mastro's are thinking right about now?
· Breaking: Wolfgang's Steakhouse Opens May 1 [~ELA~]
· Wolfgang's Steakhouse Not Wolfgang's Steakhosue [~ELA~]