Sorry for the recap delay. We had some technical difficulties, i.e. lost the entire post earlier. Enjoy! 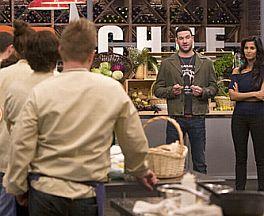 After Antonia's big win, Dale's temper tantrums and Nikki's loss last week, last night's episode showcases the Top Cheffers' exhaustion, lack of trust in each other, and the conviction that each will win the coveted title. Call us crazy, but this episode lacked a bit of a punch, probably because LA's Antonia wasn't a winner or a loser in both the Quickfire and Elimination challenge, or maybe because we already know how far she gets in the competition. Damn spoilers! And even though hottie Sam Talbot from season two played guest judge (completely flustering Antonia), and Andrew became the scariest cheftestant we've ever seen, it was kind of a yawner. Because, no Padma, salads just aren't sexy. On to the recap!

Quickfire: Grooming practices aside (Elves, we really don't need to see Dale putting on deodorant and Steph plucking her brows), the remaining seven chefs tried to refocus after being awake for 40 hours straight. They had to "bring sexy salads back," which, as most note, is actually harder than it sounds. Except for Spike who said his "sensual" beef salad "just screams 'Yeah, let's have sex after we have salad.'" Lisa thinks it's too much time to make a piddly old salad and continues to talk smack about the other chefs who shall remain nameless with bad attitudes and no skill. Antonia thinks Lisa is a contender, though. Sam said Antonia's wild mushroom salad topped with poached egg ("there's nothing sexier than breaking into a poached egg") had great flavor, but he still proclaimed Spike's salad the winner.

Elimation Challenge: Pads brings out some "nasty greasy fast food items" and talked about obesity and diabetes running rampant in the country, so the cheftestants had to make a healthy, gourmet boxed lunch for the Chicago Police Academy using a protein, vegetable, fruit and grain. In lieu of immunity for winning the QF, Spike got 10 extra minutes at Whole Foods, shopped first, and whatever ingredients he chose, no other chef could use. Automatically the chefs know how this will go: Spike will screw everyone else over, which is exactly what he went out to do. Thinking like a saboteur and not a chef, he said he'd "take away from them" bread, lettuce, tomato and chicken. Andrew said Spike's advantage wouldn't screw him. Picking up a bag of greens and thrusting it in Stephanie's face: "Smell the success! Success! Success!" Total whack job.

Kitchen Drama: The chefs had two hours to prep, cook and package the lunches for transport. Lisa made brown rice, babied it at the stoves, but when she turned around, the flame was on high and she accused no one in particular that it was blatant sabotage. Of course it happened to her, but she's the only one who thinks someone actually sabotaged her. Dale says sabotage is "just a way to cover their own ass."

Random Moment #1: Blaise, why were you wearing Antonia's headband?! Don't!

Judges Table: Most of the chefs worked within their parameters well, even without lettuce, bread, tomatoes or chicken. In fact, they were probably the better for it and got more creative. Dale's bison lettuce cups with fresh herbs won the judges over, which got him a magnum of wine plus a trip to Napa. Antonia was safely in the middle with her curry beef with jasmine rice and a fresh berry dessert. Stephanie was second to win with mushroom meatball soup and vegetable puree and yogurt. Spike got called out for boring chicken (Pads: "It's pedestrian") salad.

Random Moment #2: What's with that music video with Spike, Eric and the Kiwi?

Outcome: After hearing Andrew say at the beginning of the ep, "Woke up today with a fucking fire in my stomach. I'm either going to stab somebody or cook some amazing food," it was safe to say he was the goner. But here's how it went down. Twitchy wanted to "show these people who's the man" with is faux sushi, but forgot that he needed to use a grain. Padma said it was "very strange," Tom basically said it outright sucked. Sam, because he comes from a family of cops was the one to say that would never feed a hungry cop. Andrew argued that everything in that dish was to make you stronger and energized, that he didn't know the rules, that he'd rather serve something new and unique. Apparently Andrew doesn't know the cardinal rule in Top Chef: Always let Tom have the final word. You won't win. Back and forth between Andrew and the Big C ensued, then he got a little crazy after Lisa threw him under the bus for not using a grain, he stared at her in the stew room that creeped Antonia out, and finally---thankfully---he packed his knives. Phew. He's scaaaaary. He said he wanted to go out with dignity. Um, too late, dude.

Next week: Cooking in a diner! Humiliation! Language barriers! Eggs! RESTAURANT WARS!!!!
· All Top Chef, All the Time [~ELA~]