Hey, look! It's a bird! It's a plane! It's Mega Plywood! Welcome to tomorrow's restaurants today. Got something on deck and can't wait to tell us about it? The tip line is always open. 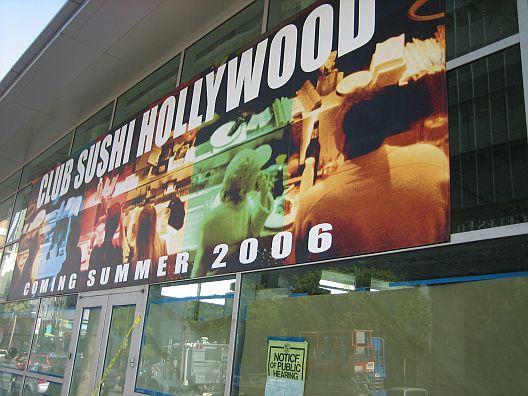 HOLLYWOOD: Everyone who ever walked, drove or stumbled past the Arclight over the last couple years has seen the Club Sushi sign hanging on the front space next to Charcoal. In 2007, it said "Coming in 2006," and recently it said "Coming in 2007." But it's 2008 and still nothing. A few tipsters saw some action recently, lots of construction workers, etc. We now know it's from the same owner as Club Sushi in Hermosa Beach, which has been around since 2006 serving everything from sushi to pizzas, pastas, salads and sandwiches. Peek inside: The space attached to the Arclight is huge. [PLYWOOD]

HOLLYWOOD: Tokio on the Cahuenga Corridor is slated to become Ecco, "Hollywood's first eco-friendly lounge." According to LAist, the lounge will have an organic menu, use eco-friendly cement, LED lighting, waterless urinals and air-pressure toilets. Entourage's Adrian Grenier will document the reconstruction for his new show Alter-Eco. [PLYWOOD] 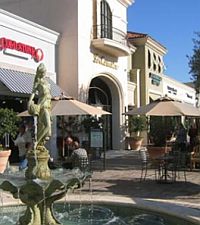 MARINA DEL REY: We have a few more deets on Nozawa's new Sugarfish opening up at the Rick Caruso-owned Waterside shopping center. We know it's opening sometime this summer (June was the first we heard, then were told they're still "finalizing details"), and as far as the menu is concerned: "It will consist of prix-fix choices of Nozawa's greatest hits along with a la carte and daily specials as well as takeout options." [PLYWOOD]

VENICE: From a tipster: "Friends of a friend own Wabi Sabi on Abbot Kinney in Venice. She tells me that the owners are planning on opening a new steakhouse right next door with a chef who used to work at the Four Seasons." We have nothing more to go on right now. Anyone else? [PLYWOOD]

PASADENA: Surprised it lasted this long in a cursed spot, Thaitalian shuttered. Coming in: Have a Rice Day, pan-Asian, of course. There's not enough of that in Old Town. [PLYWOOD]

DOWNTOWN: According to Blogdowntown, the Chado Tea Room will open inside the Japanese American National Museum in Little Tokyo. Grand opening is June 8th at 1pm. [POST-PLYWOOD]

DOWNTOWN: And per Angelenic, a "Cal-Indian" restaurant called Shaily is planned for the Hellman Building Annex storefront on Spring Street. It probably won't open until 2009. [PRE-PLYWOOD]