A few end-of-day thoughts always reserved for the EaterWire. Got some news to spread? Lay it on us.

MID-CITY: A tipster sends some interesting (though unconfirmed) news about Suzpree (at one point Tracht House was the name in the running), Suzanne Tracht and chef de cuisine Preech Narkthong's new Asian noodle concept: "Suzpree was originally planned to go into Century City, but they have decided on a location closer to Jar so Suzanne can go quickly back and forth between the restaurants. The new location is on Beverly Blvd between Fairfax and La Brea. I couldn't figure out exactly where. They think it will open 9-12 months from now. It was hard to define what the menu is going to be. They mentioned "New American" and "Asian broth soups," and that there has been ab Asian boom on the East Coast that hasn't hit LA yet. I assume the restaurant will be of that nature..." An "Asian boom" other than the Japanese, Chinese, Vietnamese, Thai, Filipino and Korean places in LA, no doubt. [EaterWire Inbox] 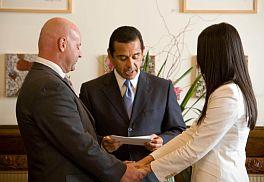 SOCIETY PAGES: Not just anyone can marry Stefano Ongaro, co-owner of All' Angelo, and Rosanna Marino, sister of Sal Marino, chef and owner of Il Grano and Ongaro's former employer: Hizzoner and noted diner-about-town Antonio Villagairosa did the honors in the mayor's office on May 2. This joins two of LA's Italian restaurant families and probably ensures Villagairosa free meals for life. [EaterWire Inbox]

CULVER CITY: About a month ago, the owners of Vinum Populi split. One owner sold his half to the other half, the owners of Ugo Café next door, and apparently he took the name, menu and most of the staff with him. It's now Ugo Wine Bar, but still has the enomatic system for tastings and serves the Ugo menu. [EaterWire]