Because we didn't have our recapping cap on today, we're going to take you right to Eater SF's brilliant break down of last night's Top Chef episode. Our girl Antonia figures prominently (which we kind of already know), so on to it! 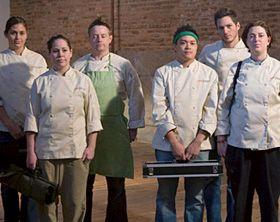 Throughout last night's entire episode of Top Chef, the emphatic point constantly repeated by the six remaining cheftestants was their desire to make it to the final four in Puerto Rico. Surely part of this was slick editing by the Bravo gods to remind us all that the finale is a mere two weeks away, but there's no doubt that with the season winding down, everyone just wants a shot at the final. And as expected, last night's episode was a shitshow that featured plenty of strategery and stereotypical reality show conflicts.

Quickfire Challenge: After a getting a 5am wake-up call courtesy of a creepily-chipper Tommy Colicchio (you think Padma's getting up at that hour?), the chefs had to work the short order egg station at Chicago breakfast hotspot Lou Mitchell's. Fancy chefs like Richard and Stephanie struggled, and in the end, Antonia pulled out a solid win, with Dale a close second. As it turned out, Antonia's win would prove to be a game-changer, since she got to choose her team for ... restaurant wars.

Elimination Challenge: Thanks to Antonia's choices of Stephanie and Richard on her team, Restaurant Wars actually became a rematch of Wedding Wars from two weeks back, with the highly-dysfunctional team of Dale, Lisa and Spike joining forces once again as the JV Squad. Antonia and Co. opted for a simple gastropub theme, while Dale and Co. went the Asian fusion route, meaning that 2005 was the inspiration for the restaurants.

Quote of the Episode: "You know, Asia's big!" —Anthony Bourdain, expressing doubt on the Asian fusion idea, while subbing in for Colicchio.

The Winners: Both Stephanie and Spike did commendable jobs running the fronts of their respective houses, especially Spike, who steered clear of the Dale-Lisa mess in the kitchen. From the get-go, it was clear that, despite Richard's unappetizing brown smear of chocolate ice cream, Team Gastropub ran away with the competition, while Team Asia imploded.

Second Best Quote of the Episode: Padma, trying to keep up with Bourdain's acidic wit, said the meanest thing she's said all season while comparing the Asian desserts: "Compared to this atrocity (shoves over Lisa's sticky rice mush), it wasn't bad!"

The Losers: Everyone on Team Asia had some faults and they all came out during an incredibly painful session with the judges: Spike, whose choice of decor that gave too much of an upscale vibe and prompted Bourdain comparisons to "Prince's van"; Lisa, who didn't do one thing correctly, from a campfire-tasting laksa to, um, cooking rice; and Dale, who took the role of executive chef, but couldn't manage petulant nemesis Lisa and completely botched butterscotch scallops. In a shocker, Lisa once again (!!) survived and Dale was sent home, even though he was probably the best chef on his team. Like Andrew last time and Jen a few weeks before that, we really wish the judges would consider past performances at least a bit, because in this case, you had Dale—talented, if a little bitchy—who had flat-out won a quarter of the challenges going up against Lisa, who has made a living at Judges' Table for the losing team.