It's a holiday weekend and we're thinking "getaway," so a natural fit is another installment of VegasWire. Know of something new on or off the Strip? Lay it on us. 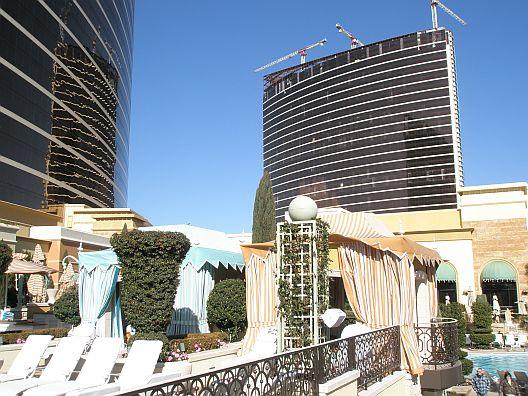 WYNN: Occasional Eater tipster John Curtas---who at the same time flatters and slams Eater LA and Angelenos---has some scoopage on the restaurants planned for the Wynn's new Encore tower, which up until now, has been kept under wraps. All unconfirmed from the powers that be but supposedly coming from deep within the operation, Tableau (in the Tower Suites wing) will close to make room an outpost of Larry Forgione's An American Place, which means Tableau's chef Mark LoRusso will get his own place at Encore called Botero. There will be a high-end Italian place "like Del Posto?without Batali." And last, Sam DeMarco, who had Sam's American Grill at the Bellagio when it opened in the late 90s, will possibly reopen a similar concept. Since we're on the topic of the Wynn, Alex Stratta, chef of Alex, has taken over Corsa Cucina near the theaters. Last we heard it will close for a short time for some adjustments, and reemerge with a new name and menu. [Eating LV/ELA]

PALMS PLACE: Maloof's new condotel opened last month, and Kerry Simon's Simon at Palms Place opened for lunch and dinner last week. Simon at the Hard Rock closed after the hotel was sold, so this is his new deal---the space overlooks the pool with mountains and Strip in the background, the menu has an organic and seasonal focus, contemporary American cuisine, and Simon even has his own indoor herb wall. [EaterWire]

PALAZZO: The Brazillian-Japanese-Peruvian mashup that is SUSHISAMBA has an official debut date: June 17. The restaurant is located in the Shoppes and will have a lounge called SUGARCANE. [EaterWire] 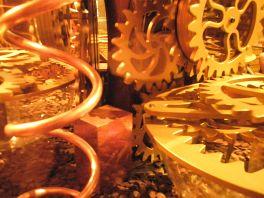 CAESARS: We got a kick out of the enormous 13-foot clock at Payard Patisserie. Every 15 minutes or so, truffles come tumbling out of four little shoots. In true Vegas fashion, it's both ridiculous and fabulous at the same time. [EaterWIre]

TRUMP: Chef Joe Isidori is heading up DJT (the Donald's initials) at Trump's new brassy condotel. We heard that it's actually one of the more promising restaurants on the Strip this year. Trump, we're sure, would say "in the universe," but most likely agrees. [EaterWire]

CULINARY SCHOOL: This is an interesting bit of news and makes sense for the area: LV businessman David Jin, the man behind the Grand Canyon Skywalk, plans to open the World Culinary Academy in Vegas by fall 2009. The school will teach basic and advanced skills, and have a restaurant open to the public. [EaterWire]