Got a tip for the EaterWire? We'll take it right here. 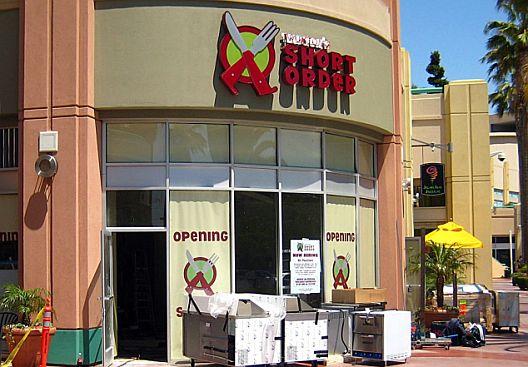 HOWARD HUGHES CTR: From a tipster: "The first-level space left by the vacancy of a baggage shop off the central entrance at the Promenade at Howard Hughes Center there's an eatery called Truxton's Short Order making progress toward opening. Today they're loading in some of the heavy equipment and a sign on the window says the place is 'Now Hiring All Positions.' I'm guessing the similarity in name and the crossed-flatware logo means the place is an offshoot of Truxton's American Bistro in Westchester?" Sure, that's a safe bet. [EaterWire Inbox]

SANTA MONICA: New signage spotted: "I work at Santa Monica and 6th street, just around the corner from La Botte – and I noticed that in the window of the former Tropical Smoothie Cafe on Santa Monica between 6th and 7th, which has been shuttered for about 6 months, a sign that says La Botte Deli. Any intel on this?" Yes, yes, yes. In fact, we heard several months ago that Stefano DeLorenzo, owner of nearby La Botte Ristorante, had dibs on that space. We don't have all the details yet, but perhaps it's a deli to rival Bay Cities? [EaterWire Inbox]

BEVERLY CTR: Even we're surprised it took this long: A Pinkberry looks to be opening in the fashionista mall, "seventh floor behind the escalators, right by Silky Smooth Ultra Creamery and Le Sportsac, steps from Charles David, Macy's and Sephora." [Racked LA]