This isn't really a StarWartch per se, unless you consider LA's nightlife kingpins celebrities. From a reader: 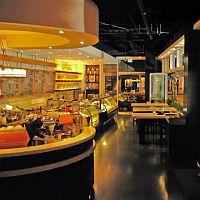 "Warning: If you don’t like the LA scene, skip this post. Thursday, May 1, 4:22 PM – Caffe Primo at Sunset Plaza. JT Torregiani (former Mr. Paula Abdul, current co-owner of Beso w/Eva Longoria), and Sylvain Bitton (partner in Dolce Group - Les Deux, Bella, Ketchup) accidentally bump in to Adolfo Suaya (owner of hotspot GOA) while waiting in line?friendly meeting. Coincidentally, Sam Nazarian (SBE, fake employer of Heidi Montag) is in the bathroom, and when he exits, spots what would otherwise be the impromptu LA magazine nightlife issue photo shoot. There was some cell phone number swapping. Since Sam is the richest, it’s worth noting he rocked his own Katsuya/SBE white hat backwards, and some DJ style honker headphones."

The Sopranos have subs at Satriale's; in West Hollywood, they have gelato at Primo.