Time once again for the StarWatch. See a celeb cut in line at your favorite breakfast spot? Tell us about it. The tip line is always open.

STK: We hear from a tipster that David Spade and The Hills' Heidi Montag were at the trendy steakhouse on 5/1. "They were not together, though I really kind of wish they had been." [StarWatch Inbox] 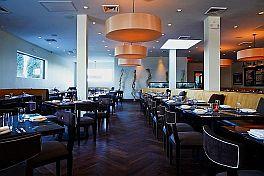 BLT: At the other New York steakhouse, Denzel Washington holding court with director John Singleton and Keenan Ivory Wayans as CAA agent Bryan Lourd had dinner across the room. [E!]

EAT ON SUNSET: She's beautiful and nice? Damn. Charlize Theron left her waiter a $100 tip on a $75 bill after she found out it was his birthday. [E!]

GRIDDLE CAFE: Some people have to wait, others think otherwise. Big Bang Theory's Jim Parsons waits "like the rest of us civilians," but Jessica Alba walks right in and grabs a booth. Does the woman ever do things the normal way? [Defamer]

CHILI MY SOUL: In a good mood and looking fit, Keifer Sutherland was spotted outside the chili house taking pics with fans, saying "Damn It!" in cellphones. "He left with a pretty brunette who was dressed in of all things blue scrubs." [Defamer]

MI PIACE: Random sighting: Jerry Springer was spotted at the Old Town restaurant, sat with his back to the window and ate alone quietly on 5/1. "No chairs were thrown." [Defamer]

VILLAGE PIZZERIA: Casey Affleck and his son were spotted eating pizza at the Larchmont location. [E!]