Share All sharing options for: SugarFISH: A Bold New World For Nozawa

Nozawa in Studio City; below right, the new SugarFISH 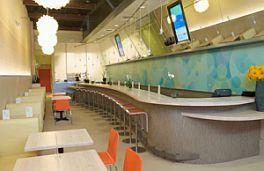 For everyone who thought Kazunori Nozawa was too strict, too impossible, the "sushi nazi," know that with his son Tom and new media entrepreneur Jerry Greenberg by his side, SugarFISH by SushiNozawa in the Waterside mall in Marina del Rey will be nothing like Sushi Nozawa in Studio City. You won't see your sushi chefs (or Nozawa for that matter)---everyone's relegated to the kitchen for preparation---so no show, no "no sushi for you." To keep it simple, the omakase concept remains intact with three "Trust Me" menus (yes, called "Trust Me" so not to scare the uninitiated away). They want you to know what your getting up and how much it costs up front so there aren't any "surprises," and therefore, Nozawa can't throw you out. The chef is working directly with purveyors "to cut out the middleman," so they're touting quality fish at moderate prices. If this all sounds primed for malls across America (with a helpful website to boot), that's the point: SugarFISH wants to be the next P.F. Chang's or CPK. The MDR restaurant debuts June 23.
· Plywood Report: Club Sushi, SugarFISH, More [~ELA~]