See something coming along in your neighborhood? Drop us a line for the Plywood Report. Photos are always welcome. 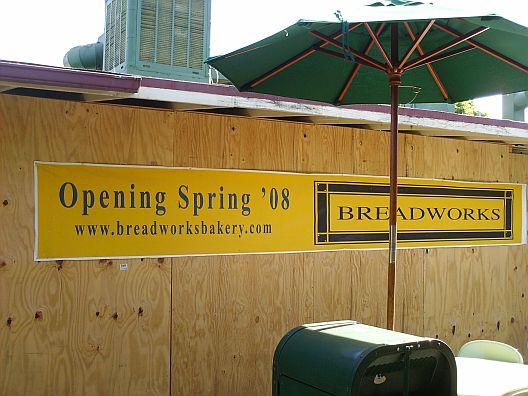 THIRD/FAIRFAX: Breadworks at the Farmer's Market was supposed to open on June 2, but owner Seth Silverman just told us there were a few glitches and hopes to pull down that Plywood by July 1. In addition to all of Breadworks sweet, savory and bready treats, they'll continue to sell the Hungarian cinnamon loaf that the previous tenant, J&T Bread Bin, was known for. [PLYWOOD]

DOWNTOWN: Steven Arroyo's highly anticipated, at least for those living in the Biscuit Lofts, Church & State still isn't open, but we know at least the liquor license is in place. It was reported that the brasserie would open last year, then it was April 2008, and then June. So, what, maybe August? We kid. It must be right around the corner. C&S will be located on the ground floor in the loading docks, all Industrial looking with metal columns and brick floors. Royal Clayton's won't have a chance. [PLYWOOD]

DOWNTOWN: Per Angelenic, Schmidt’s Brauhaus, a German restaurant and beer garden, will open later this year in a former tire shop on the corner of Olympic and Olive. Expect all the fixins: sausage, schnitzel, pretzels, beer, Oktoberfest, more beer. [PLYWOOD]