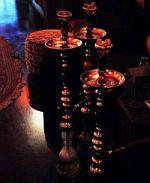 The city Planning Commission stopped a developer's dream of opening a restaurant and hookah lounge in Lawndale and plan a city-wide ban altogether. The members admit they didn't know what a hookah was or what kids did with it, but vetoed the plans anyway. Smoking's bad! Michael Hanna, who owns another lounge in Redondo Beach, says: "All they see is the smoke element. They don't see the socializing, the cultural expression...If the city were to go out and ban coffee because--all of a sudden--it thinks it's a health issue, that would upset a lot of people because Starbucks has become part of the culture in America." The commissioners vote on the city-wide ban tomorrow. [Daily Breeze]