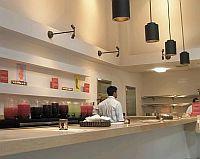 A note from a Hollywood tipster: "The restaurant next to Geisha House on Hollywood Blvd. has pulled the paper off the windows and the tables inside are set up. Looks like staff training. No signage outside, but I like the yellow door. The inside looks pretty basic." This of course means the Plywood is down around Jimmy Shaw's Loteria Grill, which we've been watching for some months now. UrbanDaddy has it that LG is "soft opening" this weekend; but it's not a soft open per se, but rather a friends and family (invite only) preview. Expect a ginormous space, at least compared to the Farmers Market original, two long bars, tequila (!), and sidewalk seating for breakfast, lunch and dinner. The full public debut happens on Tuesday, July 1, and Open Table has ressies beginning July 2. (6627 Hollywood Blvd, 323.465.2500) [EaterWire; previously]