When Top Chef started this season, we knew sole Los Angeles contestant, Foxtail's exec chef Antonia Lofaso, would make it far in the competition. At least we hoped: We'd still watch, probably pick a few favorites, but with a hometown hero you can look past all the character traits, the sneaky editing that highlights said traits, and even a sloppy dish or two. With Lofaso, we took a shine no matter what. The Spago alum always proves to be a solid cook, always has a zinger or two for her fellow cheftestants, and made it to the Final Four. We chatted with the chef a couple times this season, so in lieu of a traditional recap of last night's ep (if you're in need, go here or here),we talk with Antonia about the whole hog: Being in Puerto Rico for the finale, pigeon peas, the outcome, and why every woman wishes they were Padma. PROCEED WITH CAUTION: Spoilers ahead.

ELA: We're shocked. SHOCKED about the outcome of last night.
Antonia: Oh, well thanks. I'm in NY for the A-list awards, and I haven't watched yet, but my family and friends were texting last night. I don't know if I'll be able to watch.

Too soon? So between the time the show wrapped and you went to Puerto Rico, you opened Foxtail. Did you feel off your game?
We opened Foxtail on February 22, and we left for Puerto Rico in April. We had only been open 10 weeks or so. Anyone who opens a restaurant knows how much it takes. The moment I landed, I didn't feel my spirit was there 100%. If I really felt that I had done 100%, that I really put forth what I do, I would've been more upset about the outcome. But like I said in the past, I take responsibility for what I do. It wasn't my best day, unfortunately my worst day was in the finale episode.

Did you try to plan/study Puerto Rican food?
I did. It's similar to Caribbean cooking, and I have a background in some of those spices. I've been to Puerto Rico before. I liked the food. I think conceptually I felt good about what I did.

And you got to hack apart a pig. How exciting!
At Spago we would get whole pigs in, but I've never been given a whole pig and someone says "here you go." It was great to push ourselves to see what we're capability of doing.

Did you ever for a second wish you didn't get Nikki?
Absolutely not. Our sous chefs were there to act as sous chefs, which means take my concept my design and execute it. I couldn't have asked for, I wouldn't have wanted anyone else?wait, no I would've wanted Dale. But working with someone who wants you to do well, wants to see you do well. She said I seemed off, and I knew it, I just couldn't get my game back.

What the hell are pidgeon peas, anyway?
It's a pea indigenous to Puerto Rico, like a stewed pea. My daughter's father's parents have made them for me a thousand times. It's not difficult to cook a pea. I soaked them, I boiled them, we tasted them, they seemed alright. And then they would cool down?I just didn't get it

So at the party?wait, did Padma look that ethereal in person? She looked like a goddess.
Nikki said the same thing. She really looked like a goddess. I was so excited to see a woman so beautiful, knew so much about a food, ate like a rock star and looks like a super model. It's what every one wants to be.

Ok, so the party was over, you're in the stew room. When Padma called Richard and Stephanie and you knew they were the winners and you and Lisa were in the bottom: Worst feeling ever?
We just looked at each other and said alright, this is what it's going be. It was also six in the AM and we were up for 24 hours. It's not the worst moment ever. In almost all 13 eps, I was at the judges table for good or bad. I was used to being there.

And at the judges' table?
At that point you're not nervous, you're explaining where your concept came from, your thought process. You were just talking it out with them. I was never called out because it was something they didn't like. It was never about how it tasted or how it was cooked, it was I didn't follow the rules or something. Being called out for a technicality at this point was?I'm a really solid chef. You're always going to get the best fish or the perfectly seared steak. It's always going to be executed well. I pride myself on my technique. I wasn't operating at a 100%. And I did say at the table that I wish it was cumulative, that I proved myself that I was solid. I just wanted to finish. I wanted to compete with people who belonged to be there. 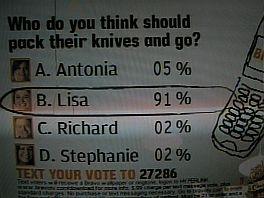 Lisa was surprised you lost.
Lisa really thought she was going home. I feel bad for her. I think she has a really bad rep on the show. You only see a small portion of who we really are. We had drinks the other night. She's amazing at what she does. We're two totally different chefs.

After you were told to pack your knives, did you know Lisa was being such a baby in the stew room?
They (Richard and Stephanie) didn't want to see me go home. We didn't want to see anyone go home. It's not like they would've been jumping up and down if she got sent home. It was a moment of honoring one of their competitors that they respected who got sent home. It was like a moment of silence.

Pretend you weren't on the show with her. If someone acted like Lisa in your kitchen, would it fly?
I don't like to pass judgment on how other people behave. Lisa and I worked together and we worked together in the capacity that our dish wasn't successful. We could've lashed out against each other, but we didn't. I don't want to pass judgment on their experience. It was their experience, not mine.

You totally left Gail hanging with the handshake at the judges' table.
When it happened it was so surreal. I was going in order of who I was with all the time, like Padma and Tom. I dove in to them first. And of course I just go to Tom, our head judge. I have the most respect for him. It was such a surreal moment. But later we laughed and I told Gail 'of course I love you'. She genuinely cares about us and our process. I would've jumped on the table and hugged them all if I could.

Who were you most surprised to see cut over the season, at any time?
Dale and Zoi. Zoi is unbelievably talented. I didn't think she got the opportunity to be on there long enough. Her episode was controversial [Ed. Note: The infamous butternut squash soup episode]. We were being called out for underseasoned food, and they were being called out for dirty food. When Dale left, that was just wrong on so many levels I can't even start. That would take a lot longer than I have to with you.

Why should Blaise win? Why should Lisa win? Why should Steph win?
Richard conceptualizes and cooks in a whole other world. I'ts amazing to watch. He gets a task and he gets concepts and themes. His ham and eggs, he blew me away by that dish. He goes concept in a way that usually takes months of preparation, there's so many levels of it. And he does it in, like 3.2 seconds, and he's successful nine out of 10 times. Stephanie, she's a class act, a team player, she loves what she does, and just a strong competitor through the entire season. She's all heart. Lisa, too. Lisa thinks out of the box. She did peanut butter mashed potatoes! I mean, that's all I have to say about that.

Sam Nazarian must be ecstatic that you got this far. He seems to be collecting celebrity chefs like toy soldiers these days.
He's one of the best men to work for. With all of this that happened with Top Chef and me. I joined the company in the hopes of being a part of this new rest group, and it's all just falling into place. All of the chefs he's brought in to the group, Jose Andres, Michael Mina, Katsuya, we go into each other's restaurants. I was just in San Francisco, and Michael (Mina) was like "Anything I can do for you, just say." I saw Jose Andres last night, and he said "We're one big family now." Sam looks at everyone like one big family. I'm going to these dinners to see these people, and to be on this list of chefs is amazing.

Oh, right. Jose Andres was a guest judge on the show. Were you already both with the company?
When he judged that episode, I brought it to the attention of the producers. We didn't know each other, never worked together. But I thought this could either be really great for SBE or really embarrassing.

How has Top Chef changed you, your cooking, your style?
It hasn't really changed my style. I learned so much about myself as a person, as a chef, as a mother, as a competitor. It's just about pushing the envelope and making sure everything you serve is 100%.
· Full Top Chef Coverage [~ELA~]