So many celebrity sightings, so little time. Care to share with the Eater StarWatch? The tip line is always open. 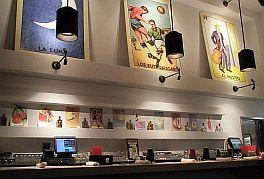 LOTERIA GRILL: "I went to try the new Loteria in Hollywood last night (7/10), as did Lauren Conrad from The Hills and her date (Brody? I'm told). They were only a table or two over from us, so we all had to sign releases. Food was good - the service friendly but a bit spotty, but that could have been since we were sharing our waiter with a 'reality' show." [StarWatch Inbox]

FRAICHE: "Last night (7/16) as we were walking out around 10 or so, who should walk in but Cybil Shepherd, rose-colored shirt, glasses to match, and a strapping man at her side. It's no Lindsay Lohan sighting, but maybe actually better?" [StarWatch Inbox]

RUSH STREET: At a preview dinner last Thursday (7/10), we're pretty sure we spotted Simpsons creator Matt Groening dining with a large group of people. He looks just like he does in animation. [Eater StarWatch]

LUCQUES: "On Saturday (6/28), Sidney Poitier was aat the booth next to us, looking very dapper. At the table across the aisle sat Peter Jacobson (Dr. Taub on House)." [StarWatch Inbox]

PINK TACO: Ben Affleck spotting having lunch with some friends at the Century City mall eatery a few hours before Paris Hilton and Benji Madden went in for dinner. [E! Online]

CAFE MED: On Monday (7/14) James Woods was spotted at an outdoor table at the Sunset Plaza. "He was with another guy and not engaged in any provocative James Woods behavior like canoodling with a twentysomething or holding up his I.Q. score or M.I.T. diploma....just behaving like a normal citizen." [Defamer]

KATANA: A few weeks ago: Kanye West was at Katana on Wednesday, July 2nd having dinner on the patio with Lil John. More recently: Brett Favre was in town for the ESPYs and dined skewers and sushi with his wife and friends. After dining at a nearby table, Girl Next Door Kendra Wilkinson ESPN's J.A. Adande stopped to say hi to the former GB quarterback. [StarWatch Inbox]

WHOLE FOODS: "I saw Project Runway’s Sweet Pea sitting and eating with a male companion at the Glendale store. The woman in front of me literally stopped dead when she saw her and I almost rammed into their shopping cart. I mean, I was happy since Sweet Pea was one of my favorite contestants but seriously, do people in Los Angeles still GAWK that obviously at reality stars? Look and walk people, look and walk!" [StarWatch Inbox]