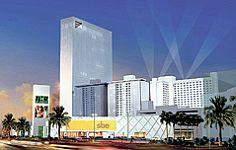 Here's everything you ever wanted to know about Sam Nazarian and then some: 32 years old, amassed his fortune (with family seed millions) when he was 22; his hot spots attract Paris Hilton and Lindsay Lohan; he lives next to Leo DiCaprio; has the occasional Hills and Entourage cameo; hates being called "nightclub king." City Councilman Eric Garcetti says Sammy Boy set the tone for Hollywood redevelopment (he "led the way and now everybody is lining up to get in"), and now he'll attempt the same with the North Las Vegas Strip by SBEizing the aging Sahara hotel and resort. Some detractors think he's overreaching, but he's not pressed: "I know what they say about me, 'He's a rich kid from Beverly Hills. What does he know?' But they don't see the whole picture." The great big Sam Nazarian picture. [WSJ]