Tony Riviera and the Primo Hospitality Group opened Caffe Primo at the Sunset Millennium plaza in early 2007, but who knew they had such grand plans swirling around their heads. A second Primo opened at Americana at Brand earlier this summer, and there's another opening in the Pegasus lofts downtown, and Primo Cucina and its "gelato lab" slated to open at the Barker Block in the Arts District later this year. Now we have word on two more projects from the Primo family: 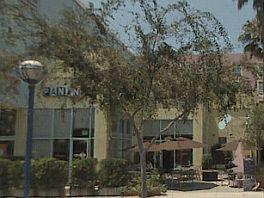 WEST HOLLYWOOD: First we have tentatively named Primo Bistro, which will open in the former Panini Cafe space in the Ramada Plaza Suites Hotel on Santa Monica Boulevard. The concept is slightly different than Caffe Primo: There will be full table service, a full liquor license, and a more expansive menu. In addition to the dining room and outdoor patio, they plan to offer a "coffee valet" service to commuters---yes, pull up, order the coffee from the waiter standing outside and go (guess that gets around that pesky no drive-thru law in WeHo). Primo will also servie coffee and pastries in the morning and cocktails and snacks at night in the lobby bar of the hotel. Construction is underway with plans for an early September opening.

DOWNTOWN: Now for something completely different from the Caffe Primo/Cucina/Bistro concept: Tony's will be a high-end supper club in a former bank building near 6th and Olive. Huge space (10,000 square feet, including a main dining room, bar and lounge, wrap-around outdoor seating, three private dining rooms, a floating wine room and a "showcase meat locker." Menu specifics are vague still, but expect Italian, pastas, steaks, seafood. Shooting for a December May 2009 debut. With the adition of Drago Centro, all of the nuevo Latino concepts, and L.A. Live among others, Downtown will look amazing...in 2009/2010.