Once again, the Eater StarWatch where we dish on your recent celebrity sightings. Wanna play? Send your tips here with "StarWatch" in the subject line. 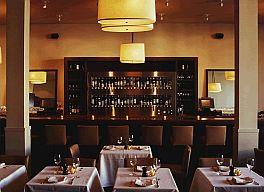 AOC: From the tipline: "My friends were dining on Friday night (6/27) and on our way to the restroom, we spotted Ryan Phillippe and his girlfriend Abbie Cornish having an intimate dinner together." [StarWatch Inbox]

MAURO CAFE: A Tony V sighting: "Mayor Antonio Villaraigosa had lunch with his daughters at the Fred Segal cafe on Melrose on Saturday afternoon (6/28)." We're told he chatted with well-wishers as he made his way through some penne, and then stopped in the kitchen to take photos with the staff. he was chatting with well-wishers throughout the meal. [StarWatch Inbox]

HOME: Cameron Diaz was at the Hillhurst restaurant enjoying some outdoor Saturday afternoon (6/21) brunch. "She had hashbrowns on her plate! Skinny celebs eat real food! How?!" [Defamer]

THE WAFFLE: In the midst of the heat wave, Flight of the Conchords' Bret McKenzie "a.k.a. the cute one" was spotted huddled in a booth with five or six friends last weekend (6/21). [Defamer]

SWINGERS: Eating "the kind of dinner one might order after some 'happy cigarettes,'" Dave Chappelle eating quite a spread---french toast, waffles, and milkshakes---with a friend on Sunday (6/22). [Defamer]

KIKA SUSHI: A few weeks ago Tim Robbins was spotted at this little sushi spot on Larchmont. Per the tipster: Let me just say, he is hot. Sarandon is a lucky lady!" [Defamer]