Share All sharing options for: Morningstar Beefs Up 750ml, Headed Downtown to Casa

Morningstar in the kitchen at 750 ml in South Pasadena

We popped on down to 750ml, Steven Arroyo's South Pasadena bistro, because we knew Kris Morningstar was tapped to streamline things a bit. We haven't been since December, but apparently, as it is everywhere, business was slipping. Morningstar, who left Blue Velvet in March (where he got a very enthusiastic two stars from Miss Irene), talked over the menu with us and passed along his new housemade charcuterie (the smoked chorizo and lardo were damn good) and some addictive sweet corn agnolotti. The menu looks much more approachable with the chef's influence---roasted bone marrow he swears was inspired by St. John in London, steak frites, roast chicken for two, handmade pastas, sweetbreads, seasonal salads, steamed mussels--and the pricing is more on par with the neighborhood. This alone is news and worth a second look. Unfortunately, Morningstar is leaving at the end of August for a new gig, but a young Joe's alum will be on board to steer the ship. Hope they can keep this speed because it's working. So where is Morningstar headed? He just signed on as chef partner for the forthcoming Casa downtown. We're unsure what he knows about Mexican cooking, but he's very enthusiastic about it. 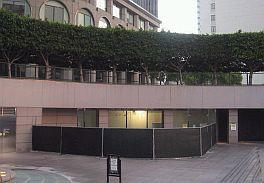 According to the chef: "We will be doing 'new mexican' cuisine during dinner service. We are not doing a beans and rice place. I want to incorporate the soul and traditions of Mexican cuisine in a fresh manner, using modern technique in a way that will be new to Los Angeles. The design of the place has very clean lines and warm tones akin to modern Mexico City. During lunch we will go more taqueria-style with great ingredients and fresh tortillas." So now there's Casa, John Sedlar's Riveria, Gabe Morales' Provecho and the Conga Room, not to mention the longstanding Ciudad. Downtown will be flush with 'neuvo Latino' cooking by next year. According to Angelenic, Casa construction is well underway at California Plaza with a suspected end-of-year debut.
· EaterWire: 750ml Chef Changes [~ELA~]
· Blue Velvet Chef Change [~ELA~]
· Casa Beginning Build Out at California Plaza [Angelenic]