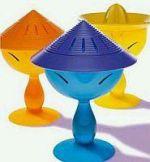 The Koreatown Pinkberry seemed to be the last LA stronghold for the Alessi "Madarin juicers" that had New Yorkers all in a tiz about how un-PC they are, but no more. From a trusty tipster: "I don't make a habit of going to Pinkberry, but the Koreatown location---the one you called after the story about the controversial Mandarin juicers broke---is the closest froyo store to my place. Well, while they may have had the Mandarin juicers in the store last week, they have all be cleared away now. A photo remains of them on the price list in the case, but the juicers themselves - gone. As empty as the store is these days, I sincerely doubt someone's come in and bought them all in just a few days." [~ELA~]