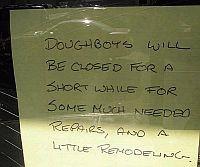 Doughboys shuttered its Highland location last week, but we still don't have word from the owners about what sort of "renovations and repairs" are planned. But a tipster sends some details he learned via a (now) former waiter: "The owner hadn't been paying people on time. The cook demanded on Wednesday that he and his staff be paid immediately or they wouldn't come in---that was the breaking point that forced the closure. The owner has licensed the Doughboys name and concept to somebody, so it's possible it could come back in the future but with more competent owners. People blame the "management" of the restaurant, but the owner had such a tight leash on how everything was done that it prevented anything positive from happening in how the place was run." Again, words from a server who just lost his job. Take it with a grain. [EaterWire]