It's not every day you get such a well-rounded date at 8/8/08 and several places are taking advantage of what they deem lucky digits. Those debuts and more in this week's Dish. See something we missed? Do let us know. 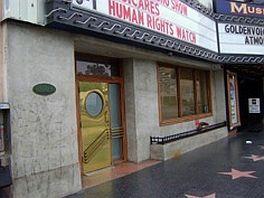 HOLLYWOOD: Just as the website (and we) promised, the Blue Palms Brewery opens on Friday. This is the former Blue Palms Lounge next to the Music Box at the Fonda but now renovated---the carpet pulled up, original floors refurbished, some high top tables and banquettes put in---with owner Brian Lenzo, who worked at the original original Blue Palms on La Cienega, as your beer host. There will be 24 rotating taps ensuring you won't get the same beer every time you go in; he's launching with Stone Brewery's Vertical Epic 8/8/08 ale, kegged for your 8/8/08 drinking pleasure. The food is of the American classic variety with a twist: kobe burger with short ribs, spaghetti-o's and meatballs, buffalo hot dogs, wings, steaks, seafood, snacks. Opens softly Friday and Saturday this weekend, closed Sun-Mon, and then full steam starting Tuesday. (6124 Hollywood Blvd, 323.464.2337; website)

HOLLYWOOD: Even though it's still boarded up, Hush supper club is supposed to open on Friday. Speakeasy, live jazz, cocktails, small menu, chef from Smitty's in Pasadena and Dominick's (pre Warner Ebbink and Brandon Boudet), lots of Hollywood history to the space. (6533 Hollywood Blvd, 323.467.4874)

MARINA DEL REY: Ok, it doesn't open until Monday (8/11), but our guess is The Counter in the Waterside center will be at least friends and family this weekend. Custom burgers, fried pickles, milkshakes, everything the original promises. (4786 Admiralty Way, Marina del Rey, 310.827.8600; website)

Can a Booze-Free Bottle Shop Change the Way Angelenos Think About Drinking?

West Hollywood Proposes $17.64 Minimum Wage for All Workers Beginning in 2022

Roman Food Is Invading LA, and Next Up Is Echo Park

Cajun seafood with a Filipino twist in Carson, ocean front dining in Long Beach, and more