While we honor of Labor Day by going to the beach, here's a look at where we've been eating around town this summer. Bon appetit! 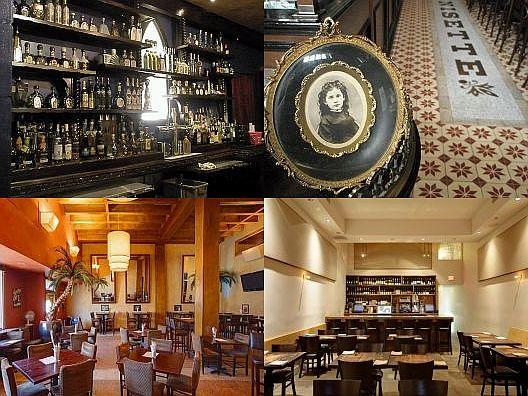 Mission Cantina (8/27): Because it has the same owners, this Hollywood bar has a vibe similar to the Bowery down the street and Delancey right next door, and we like that. Comfy booths on one side, very cool dark-wood bar on the other. Lots of tequila choices, Mexican beers in the bottle. After a little tasting, the basic margarita trumped the grapefruit-lavendar because it was simple (fresh lime juice, agave nectar instead of triple sec booze). Also like Bowery and Delancey, we came here both for drinks and the food, and for just a few days in, the barbacoa and the smoked pork tacos rocked it, and the poblano mole and pudding-like corn bread are way better than they should be for a bar (though the chicken could use a little work). Love the homemade chips and guac. Service: Charming. Great patio. Chance we'll go back: Already added to the rotation.

Pizzeria Mozza (8/17): Packed at 5pm on a Sunday. Haven't been in awhile, unplanned, desperately craving clam pizza and budino, both of which were absolutely perfect. Dressing on salad greens too acidic, however. Grabbed last corner seat at the bar--serendipity. Service never waivered. Chance we'll go back: When the stars align once again.

Blue Palms Brewhouse (8/14): Checked it out in the first few days. Nice space, a lot bigger than we thought. Owner very passionate about what he's doing here, bartenders know their stuff. The beer list is pure beer geek heaven. We're not beer connoisseurs but some amazing finds on tap; non-beer drinkers should keep an open mind. Burger topped with short ribs—lots of meat, pretty tasty. Sweet potato fries were delicious. There was an impromptu screening of The Big Lebowski, which probably happens all the time. Chance we'll go back: Of course, dude.

750ml (8/13): When Kris Morningstar told us he was helping out Steven Arroyo's South Pasadena bistro, we decided to give it a second (and third) chance. The menu read better, the prices were more on point with the neighborhood. House-made charcuterie is a reason to go (pates, chorizo, and sweet, sweet lardo to slab across some bread), and we'll return for the pork belly confit or corn agnolotti with pea tendrils any time. Approachable wine list. Chance we'll go back: Yes, but hope they can keep the momentum after Morningstar moves on.

Hatfield's (8/6): Embarassed to admit, but this was our first time to the Beverly Boulevard bistro. Service was top notch, an inspired take on seasonal fare, nothing over done but still very unique, all on point. Deserves all of the accolades. Chance we'll go back: Can't wait.

Comme Ca (8/4): Craving wine and French after Bottle Shock screening. Table in the bar, scattered service at first but once she got her bearings it was OK except for the Bordeaux she brought instead of the Burgundy we ordered, and then insisted we ordered a Bordeaux (nope). Kitchen?scattered. Tarte flambé came to the table burnt black; we didn't even give the guy a chance to set it on the table. The replacement was cooked perfectly, however. Mussels delicious, although only about half actually open. Frites fabulous. Should've ordered the cheese. Chance we'll go back: Maybe not on a Monday.

Little Dom's (7/19): Solo seat at the bar for a quick bite. Burger, sweet summer corn with parmesan and basil, and those addictive fried smashed red skin potatoes on the side, a nice glass of rose. Service was efficient. Neighborhood crowd. Sidewalk tables and dining room, completely full. Want to try breakfast. Chance we'll go back: Looking forward to it.

Animal (7/14): Can't get enough. This time no fried quail (sad) but pork chop on offer instead, which would've been fine if that's what we wanted; squash blossoms were missing the cheese and came out filled with undercooked batter. Kitchen made up for it by sending out one thing we would never try, the fluffy biscuit and sausage gravy topped with a beautifully cooked slab of foie gras. Hit of the night. Chance we'll go back: Always.

Anisette (7/9): The long-awaited opp for full sit-down dinner. Group of four, 8:15 reservation, waited almost an hour past that because some idiots wouldn't leave their table after paying their bill. "They made friends with their neighbor," the host said. "Buy them all a glass of champagne and ask them to move to the bar," we said. "We just don't do that." After we suggested we might head over to Bar Pintxo, another table miraculously opened up. Service was eager but challenged. Kitchen and bar timing still seemed off. Foie gras mousse and other apps impressed, unfortunately the roast chicken entree was over cooked, the steak undercooked, but the beef cheeks were just right. Chance we'll go back: Bouchon will be closer.