Share All sharing options for: Eater StarWatch: Giada at Bay Cities, Jessica Alba at Katana and Jinky's, "Annie Hall" at The Grill, MORE

Time once again for the Eater StarWatch. See a celeb making the rounds at your favorite restaurant or watering hole? Do let us know. 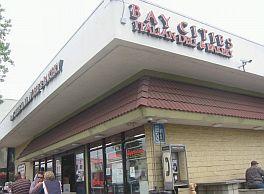 BAY CITIES: Food Network alert: "I was doing some late afternoon shopping at Bay Cities on Tuesday (9/9) and bumped into the absolutely gorgeous Giada De Laurentiis and her crew. Very nice. I guess they were setting up for some FN shoot." Hope they got the Godmother. [StarWatch Inbox]

RUSH STREET: The lovely Barbara Hershey was seen dining with friends at the Culver City spot on Wednesday (9/10). [StarWatch Inbox]

KATANA: When all hell broke loose at the House of Blues on September 4 (fights, street shut down), Jessica Alba and husband Cash Warren had to wait for police after their meal across the way. [StarWatch Inbox]

JINKY'S CAFE: Another Alba sighting: She, her baby and her baby daddy were having breakfast at the Hollywood location last weekend. [StarWatch Inbox]

GRILL ON THE ALLEY: All sorts of sightings in the last two weeks: An "Annie Hall" reunion with Woody Allen and Diane Keaton (9/4), and Geena Davis, Mark Wahlberg, Jon Lovitz and Rob Reiner spotted on Thursday (9/11), all dining separately we presume. [StarWatch Inbox]

KATSUYA: Desperate Housewives Nicole Sheridan chatted on her chellphone through most of her meal at the Hollywood location. [People]

THE STORK: Hillary Duff recently palled around with some friends over dinner at the new Hollywood spot, and Lance Bass showed up for the club later. [People]