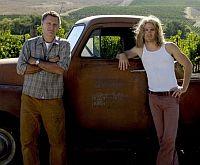 Eater SF has been keeping tabs on a little war that's started between Napa and Sonoma Valleys after the "Bottle Shock" release, the movie touting the famed 1976 competition where Napa's Chateau Montelena bested the French. And it's getting heated. First, Sonoma took some shots at Napa saying that the grapes for the award-winning chardonnay were actually grown in Sonoma, not at Chateau Montelena. Napa shot back: The movie was actually filmed in Sonoma, not Napa, so there. And now the movie folks weigh in: "The decision to film 'Bottle Shock' in Sonoma — rather than Napa — County, [producer Brenda] Lhormer maintained, was 'economically driven' ... 'We made some choices to show off the Napa Valley in the most beautiful way. People who watch the movie think it's in Napa, so Napa gets name recognition right away.'" [ESF]