Adventures in Shilling: Millions of Milkshakes

Share All sharing options for: Adventures in Shilling: Millions of Milkshakes

It's time for another edition of Adventures in Shilling, where we fight shilling the best way we can: by shaming tasteless, unscrupulous shills into submission. Well, that's the plan, at least. Fight shills yourself by dropping offensive links in the tip jar. 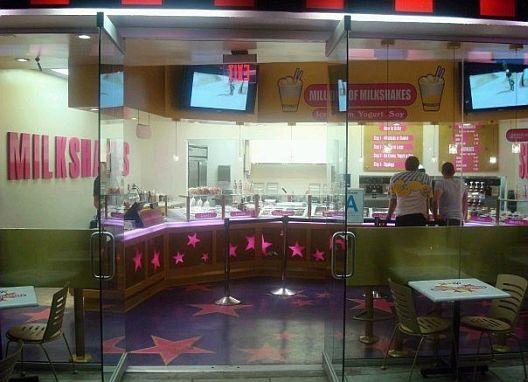 Millions of Milkshakes brought it on themselves, really. It started with the Britney, Lindsay, Paris shake signage, then the very boastful website claiming there are more than 75 million possible flavor combinations (after a "UCLA professor and Aerospace associate calculate each and every ingredient combination"). Add in the fact that people actually like milkshakes and would probably flock, and this was one venture wide open for criticism. Now the shills (more likely, shill, singular) are out in full force, using more "oooh, famous people!" tactics because it doesn't matter if the milkshake is good or bad, just as long as Becks pretends to like it.

1) If it's on TV, it must be good: "After seeing a tv commericial of millions of milkshakes today i went down there tonight. They were too busy at least 50 people lining up around 10pm, i could not wait so i will try again tomorrow." [Eater Comments]

2) Look what it did for Dolce: "Went into millions of milkshakes tonight and saw some stars from the tv show the hills, it has only been open for a few days and stars are already lining up, also i heard that david beckham and his kids were there yesterday, Pinkberry WATCH OUT" [Eater Comments]